“Folks used to come to my house and say, This place looks like a museum. And that’s where the idea came from. I had this quest for collecting just for me. Then, all of a sudden, something came over me and I thought, How dare you collect all of this just for yourself?  You could share all of this.”
~ Ralph E. Hunter, Sr.

The African American Heritage Museum of Southern New Jersey (AAHMSNJ) was founded by Ralph E. Hunter, Sr., and supported by a coalition of area businesses, education professionals, collectors and community residents.  The museum  sprung from a dream.

Over thirty years ago, Mr. Hunter began a personal collection of African American cultural, artistic and media images that inspired the creation of the museum. It started with a discovery in a North Carolina antique shop. Tucked away in the back was an original edition of “Little Black Sambo” by Helen Bannerman. “I bought it to take it off the market,” Mr. Hunter says. But instead of hiding it, his goal became just the opposite.  He dreamed of displaying it in an effort to preserve history, and the book transformed the treasures he had collected into the first exhibit.

After more than three decades of acquiring pieces, the collection now numbers in the thousands, and Mr. Hunter is committed to sharing it with school students, families and others interested in the honest depiction of the African American experience.

In addition, Hunter has created two unique venues for local African American artists to showcase their work and gain the recognition they deserve. 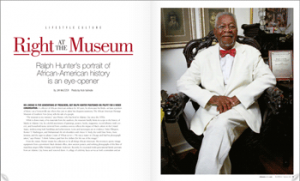 2 thoughts on “Our Founder”