Traveling Presentation 12: Artistry of The Quilt 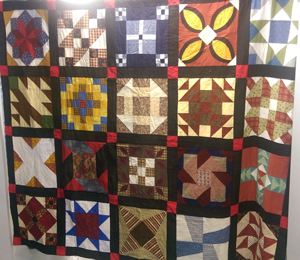 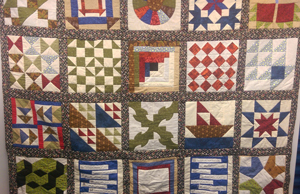 The bright colors and large, lively images that characterize the African American quilt-making tradition have their roots in West Africa, where fabrics often were decorated as a means of identification and to communicate messages that could be seen across long distances. … Transplanted to America, this heritage includes many tales passed down from generation to generation of quilts stitched by slaves in the South with patterns and images that served as secret codes to guide fellow slaves on their escape to freedom on the Underground Railroad. It is said that Abolitionists along the escape routes assisted these efforts by hanging signal quilts outside homes that were safe for slaves to hide or that would provide them with food, clothing and other help on their journey. It is known, too, that before the Civil War, Northern women, black and white, sewed inscriptions and images on quilts to illustrate the evils of slavery. These quilts often were sold at fairs to raise money for anti-slavery causes. … The tradition survives to this day among groups like the Queen Quilter Society of Atlantic City and in the colorful work of quilters like Atlantic City native Thelma A. Gordy, who donated these examples to the African American Heritage Museum of Southern New Jersey.