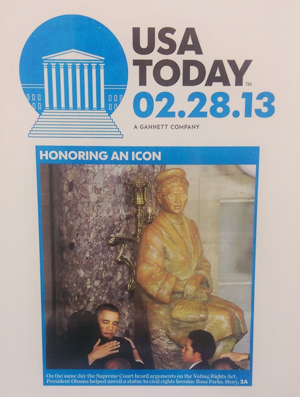 “In a single moment, with the simplest of gestures, she helped change America and change the world,” said President Obama as he led the Feb. 27, 2013, unveiling of the only statue of an African American woman in the U.S. Capitol.

Honored as the “First Lady of Civil Rights” and the “Mother of the Civil Rights Movement,” Rosa Parks, a 42-year-old Montgomery, Ala., seamstress and long-time secretary of the local office of the NAACP, became a national figure when she was arrested on the evening of December 1, 1955, for refusing a white driver’s order to give up her seat to a white passenger on a segregated city bus. Her defiance sparked a 381-day boycott by blacks of the city’s busses and launched the public career of a young, unknown Baptist minister in town, Martin Luther King Jr., who was recruited by the NAACP and others in the Montgomery black community to lead the boycott. The boycott, which ended a year later when the U.S. Supreme Court in a separate case declared Alabama’s segregated bus law unconstitutional, heralded the birth of the modern Civil Rights movement.

The Rosa Park statue was the first in the Capitol’s Statuary Hall in 130 years to be commissioned and paid for by Congress. It was sculpted in bronze by Eugene Daub. It stands nine feet tall, including the granite pedestal, and weighs more than two tons. Mrs. Parks is depicted in a coat and hat, clutching her purse, gazing out an unseen bus window, waiting to be arrested. As if to symbolize her courage and resolve, her figure appears to rise from the rock-like formation on which she sits. 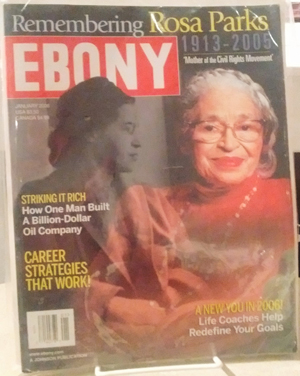 In “Remembering Rosa Parks,” the popular African American monthly examined the lasting legacy of the woman who once said, “You must never be fearful about what you are doing when it is right.” 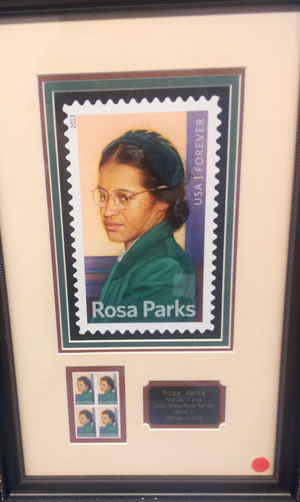 The U.S. Postal Service issued a “Forever” stamp honoring Rosa Parks on what would have been her 100th birthday on Feb. 4, 2013. … “Parks’ quiet strength helped to change a nation,” Deputy Postmaster General Ronald A. Stroman said on the day of the commemoration. … The African American Heritage Museum of Southern New Jersey celebrated the release with a special USPS cancellation of the new stamp as part of the museum’s February 2013 African American History Month exhibit.