Abolitionist, author, lecturer and statesman, Frederick Douglass was born a slave in Maryland in 1818. He escaped to freedom as a young man and became a leader of the struggle to end slavery, known nationwide for his eloquence as a speaker and writer. He was an advisor and confidante of President Lincoln’s and traveled as far as England and Ireland to lecture against slavery. He also was a staunch supporter of gender equality and was the only African American to attend the first women’s rights convention, held in Seneca Falls, New York, in 1848. In 1872 he became the first African American nominated for Vice President of the United States — although against his will — as the running mate of Victoria Woodhull on the Equal Rights Party ticket. … A firm believer in justice for all peoples — black, female, Native American or recent immigrant — Douglass famously said, “I would unite with anybody to do right and with nobody to do wrong.” He wrote several autobiographies, the best known being his 1845 memoir, “Narrative of the Life of Frederick Douglass, an American Slave”. … His renown was such that here he is featured on an 1883 cover of the popular national political journal Harper’s Weekly. … He died in Washington, D.C., in 1895 and is buried in his hometown of Rochester, New York. 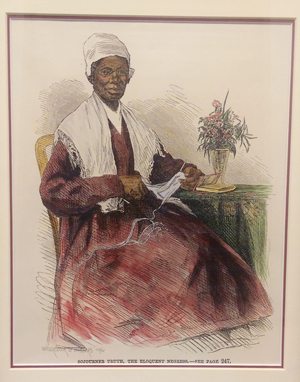 Abolitionist and women’s rights activist Sojourner Truth was born into slavery as Isabella Baumfree in Ulster County, New York, in 1797. At 9 years old she was separated from her parents and sold with a flock of sheep for $100. She was sold twice more before escaping with her infant daughter to freedom in 1826 — the year before New York state abolished slavery —leaving her other daughter and 5-year-old son behind. Shortly after her escape, Truth learned that her son had been illegally sold to a man in Alabama. She sued in United States court and eventually secured her son’s return in one of the first cases ever in which a black person successfully challenged a white person in court. … She traveled far and wide in her fight to end slavery and collaborated with leading abolitionists such as Frederick Douglass and William Lloyd Garrison. In 1850, her memoirs were published under the title “The Narrative of Sojourner Truth: A Northern Slave,” which she dictated to a friend because she could not read or write. … As an advocate for women’s rights she was ahead of her time. She spoke at the first National Women’s Rights Convention in Massachusetts, and in 1851 delivered a famous speech at the Ohio Women’s Rights Convention that would later be titled “Ain’t I a Woman?” … During the Civil War she helped recruit black troops for the Union Army and later was called to Washington, D.C., to assist with relief efforts for newly freed slaves. There she met and spoke with President Lincoln about her beliefs. After the war, she fought for desegregation in public transportation in Washington by riding in streetcars designated for whites only and spent her later years working to secure land grants from the federal government for former slaves. She argued that ownership of land would give African Americans economic self-sufficiency and free them from lives of poverty and servitude as sharecroppers. Congress did not approve the plan, but Truth never gave up fighting for it. She died at her home in Michigan in 1883 at the age of 86. … (This color print is from an engraving published in the Dec. 25, 1869, issue of Frank Leslie’s Illustrated, a popular news and literary weekly based in New York City. The caption underneath reads: “Sojourner Truth ― The Eloquent Negress”.) 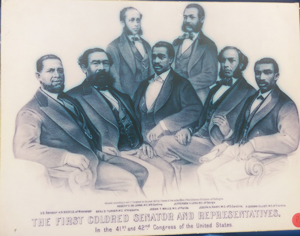 “The First Colored Senator and Representatives”

For a brief time during the Reconstruction Era after the end of the Civil War, African Americans in the defeated South were able to run for elected office. This 1872 engraving by famed print-makers Currier & Ives showed the first such group to go to Congress. … With the end of Reconstruction in 1876 and the withdrawal of federal troops from the former Confederate states, blacks would be systematically stripped of their political and legal rights, and almost 100 years would pass before African Americans from the South would return to Congress. 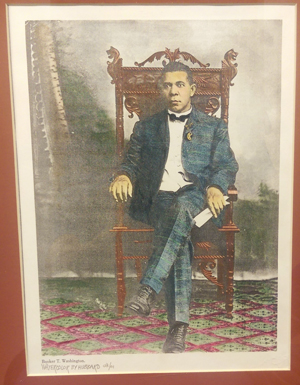 Arguably the most prominent African American of the late 19th and early 20th centuries, Booker T. Washington was the founder of Alabama’s Tuskegee University. The son of a cook and an unknown white man, Washington was born a slave in Virginia in 1856 and did not receive formal schooling until he was 16 years old, when he walked 500 miles to attend Hampton Normal Agricultural Institute in Virginia. At Hampton he worked as a janitor to pay his tuition before receiving a scholarship with the help of the school’s founder and headmaster, a U.S. Army general who had commanded an African American regiment during the Civil War. In 1881, the Alabama Legislature approved $2,000 for a “colored” school — the Tuskegee Normal and Industrial Institute — and at the recommendation of the Hampton headmaster Washington was chosen to run it. Though criticized by some African American leaders for his “go slow” philosophy of racial equality, under Washington’s leadership Tuskegee became a major university, growing by the early years of the 20th century to a student body of 1,500, with 200 faculty members, more than 100 buildings and an endowment of $2 million. His autobiography, “Up From Slavery,” brought him national acclaim, and in 1901, he was invited to dine with President Theodore Roosevelt at the White House. The invitation aroused great hostility in the South, but Washington went on to serve as an advisor to Roosevelt and his successor, William Howard Taft, on racial issues. He remained the head of Tuskegee until his death in 1915. 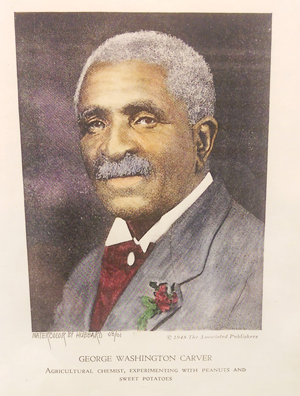 George Washington Carver was a world-famous botanist and agricultural chemist. He was born into slavery in Missouri in the 1860s, but unlike most slaves was taught to read and write. As a young man he traveled across the Midwest, working and attending school, and in Iowa earned two university degrees in agriculture. In 1896, he accepted a teaching position at Booker T. Washington’s all-black Tuskegee Institute in Alabama. He taught at Tuskegee for the rest of his life, stressing the importance of crop rotation, the value of planting peanuts to improve soil quality and finding many practical uses for peanuts, sweet potatoes and other agricultural products. His discoveries and research helped poor Southerners vary and improve their diet and contributed significantly to the economy of the South by teaching farmers how to replenish land depleted by cotton-growing. Carver died at Tuskegee in 1943 and was buried at the campus near of the grave of Booker T. Washington. … The George Washington Carver National Monument in Diamond, Missouri, was created soon after his death by legislation sponsored by Harry S. Truman, U.S. senator from Missouri who would later become president. It was the first national memorial to an African American.