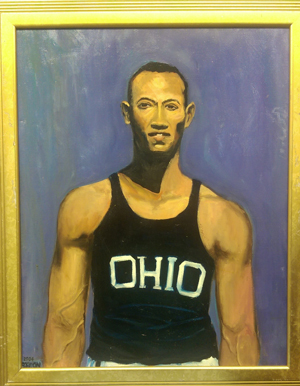 At his death in 1980, The New York Times said of four-time Olympic gold medalist James Cleveland “Jesse” Owens that he was recognized in his lifetime as “perhaps the greatest and most famous athlete in track and field history,” and ESPN has ranked him one of the 10 greatest North American athletes of the 20th century. … A sprint and long jump specialist, as a student at Ohio State University Owens set three world records and tied another in less than an hour at the 1935 Big Ten track meet in what has been called “the greatest 45 minutes ever in sport”. At the 1936 Summer Olympics in Berlin, Owens single-handedly crushed the Nazi myth of Aryan supremacy and achieved international fame, winning gold medals for the 100-meter and 200-meter dashes, the long jump and the 4 × 100 meter relay. … Today, the Jesse Owens Award is USA Track and Field’s highest honor for the year’s best athlete in the sport. 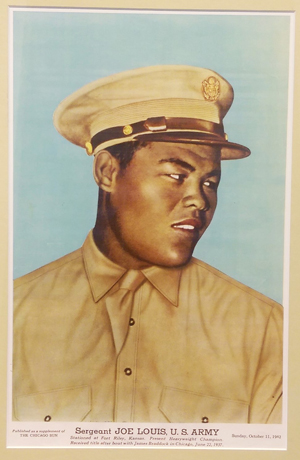 Published at the height of World War II, this photograph in a major American newspaper testifies to the renown commanded by heavyweight champion Joe Louis in his day. … Five years earlier, in 1937, a decade before Jackie Robinson became the first African American in Major League baseball, Louis shattered the color line in boxing, defeating James Braddock for the title at a time when blacks mostly were banned from competing at the highest levels of sports. It was a moment of tremendous pride for African Americans, in many respects a social and cultural turning point in their struggle for equality. Harlem Renaissance poet Langston Hughes would write: “Each time Joe Louis won a fight in those Depression years, even before he became champion, thousands of black Americans would throng out into the streets all across the land to march and cheer and yell and cry because of Joe’s one-man triumphs. No one else in the United States has ever had such an effect on Negro emotions — or on mine. I marched and cheered and yelled and cried, too.” … The “Brown Bomber” won 72 of his 75 professional fights, 57 by knock-out. His reign as champion — from 1937 to 1949, the longest of any heavyweight in history — helped restore the integrity and popularity of heavyweight boxing and paved the way for future African Americans to contend for the title. In 2005, Louis was ranked the No. 1 heavyweight of all-time by the International Boxing Research Organization, and Ring magazine has ranked him at the top of its list of the “100 Greatest Punchers of All-Time”. The Joe Louis Arena in his hometown of Detroit is named in his honor. 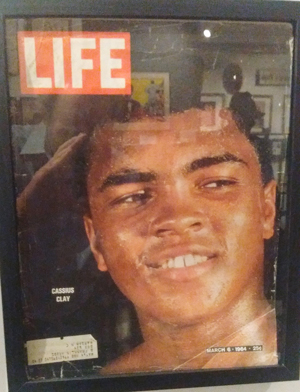 March 6, 1964, marked Muhammad Ali’s first appearance on the cover of LIFE — 10 days after he defeated Sonny Liston in Miami Beach to capture the world heavyweight title — and just before he embraced the Nation of Islam and changed his name from Cassius Clay. The Clay-Liston matchup was one of the most anticipated bouts ever. Liston, an intimidating puncher, was heavily favored to win, but the 22-year-old Clay was too much for him, and his dazzling performance through the first six rounds convinced Liston’s corner to concede the match at the start of the seventh round. The two fought again in May 1965 in Maine, when Muhammad Ali, as he was now known, sent Liston to the canvas twice in the first two minutes and won by a first-round knockout. 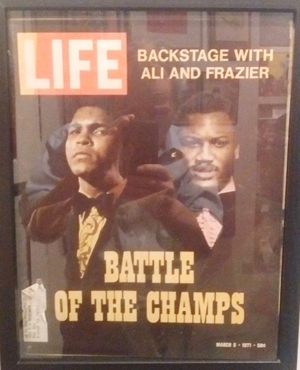 LIFE Magazine ― “Battle of the Champs”

Muhammad Ali and Joe Frazier both were undefeated and both had legitimate claims to the world heavyweight championship when they met for the first time at Madison Square Garden on March 8, 1971. Frazier held the official crown after defeating two titleholders by knockouts, while Ali had successfully defended his title for three years before boxing authorities stripped him of his championship in 1967 after he was convicted of draft evasion for refusing to be inducted into the armed forces at the height of the Vietnam War, which he opposed. … “The Fight of the Century,” as it was billed, saw both fighters guaranteed $2.5 million, an unprecedented sum for the time, and it went the distance. Frazier defended his title, knocking Ali down in the 15th round and winning by unanimous decision. … Frazier would lose the title two years later to George Foreman. Ali would split two bouts with Ken Norton and then stun the boxing world by defeating Frazier in a rematch in October 1974. Ali then met Foreman for the championship in Kinshasa, the capital of Zaire (now the Democratic Republic of the Congo), and “The Greatest” again surprised everyone by defeating Foreman to become champion for the second time in his career. … Ali and Frazier would fight one more time, in October 1975, in Manila, the capital of the Philippines. Considered one of the best and most grueling matches ever, Ali successfully defended his title, winning by technical knockout when Frazier’s corner conceded after the 14th round. 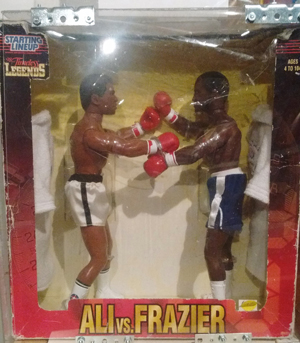 The lore of Ali-Frazier endured long after the careers of the two boxing greats were over. Toy manufacturer Kenner introduced these action figures for sale in stores in 1998. The back of the box features a brief history of their three legendary fights. 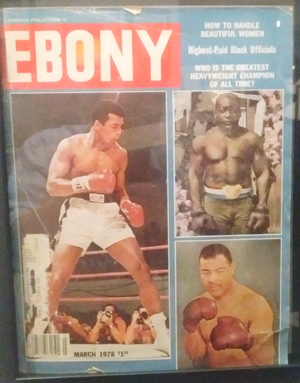 EBONY Magazine ― “Who Is the Greatest?”

In March 1978, the popular African American-owned monthly asked the question “Who Is the Greatest Heavyweight Champion of All Time?” above cover photos of Jack Johnson, Joe Louis and Muhammad Ali. … Johnson, who fought during the most repressive years of the Jim Crow era, held the championship from 1908 to 1915. In 1910, he defeated the popular ex-champ James L. Jeffries in a racially charged match that shattered the myth of white athletic superiority and triggered anti-black riots across the country. … Joe Louis held the heavyweight championship from 1937 to 1949, the longest of any fighter in heavyweight history, and was one of the most recognized and popular sports figures prior to the Civil Rights era. … Like Jack Johnson before him, Muhammad Ali was outspoken and provocative, exploiting his celebrity to help transform the image of the African American athlete, and American athletes as a whole, with his embrace of racial pride and refusal to humble himself before the sports, media and political establishments. Ali was the only fighter to win the heavyweight title three times (1964, 1974, 1978). His rise to prominence at the height of the Civil Rights movement and his opposition to the Vietnam War made him a polarizing figure for many and a hero to many others. His 1967 conviction for draft evasion was overturned by the U.S. Supreme Court in 1971, and his stand against the war, which cost him his boxing crown at the peak of his career, would later be recognized for the courageous act that it was. 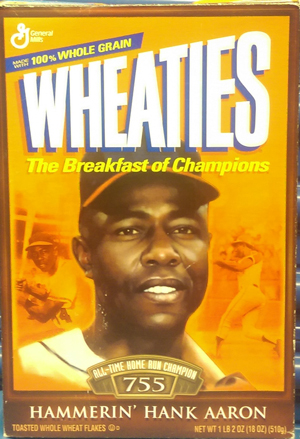 While many cereal manufacturers over the years have exploited African American images, negative and positive, for profit, the examples we are most familiar with today are associated with General Mills’ Wheaties brand. … “The Breakfast of Champions” slogan, launched in 1933, has proven an ideal vehicle for using sports stars as a marketing tool. To date, Wheaties boxes have featured 10 black athletes. The first, in 1952, was Brooklyn Dodgers star catcher Roy Campanella. Thirty-four years later, Walter Payton, famed running back for the Chicago Bears, became the second. Michael Jordan has appeared on six boxes, the most among black athletes. … The four vintage boxes in this exhibit feature Emmitt Smith, Julius Erving, Hank Aaron and Muhammad Ali.