Philadelphia-born Marian Anderson was one of the great opera singers of the 20th century and a leading figure in the struggle of African American artists to overcome racial prejudice. She first achieved stardom in Europe at a time when black singers were excluded from performing in major U.S. concert halls. In 1939, at the peak of her fame, the Daughters of the American Revolution refused permission for Anderson to sing before an integrated audience in the DAR’s Constitution Hall in Washington, D.C. First Lady Eleanor Roosevelt resigned from the organization in protest, and with the aid of her husband, President Franklin D. Roosevelt, Mrs. Roosevelt arranged for Anderson to sing in Washington on Easter Sunday, April 9, 1939, on the steps of the Lincoln Memorial. An audience estimated at 75,000 turned out for the performance, and millions more listened on radio. In 1955, Anderson became the first black person, American or otherwise, to perform at the New York Metropolitan Opera. She would go on to serve as a goodwill ambassador for the U.S. State Department, giving concerts all over the world. She was a delegate to the United Nations Human Rights Committee and was active in the Civil Rights movement. Twenty-four years after her Lincoln Memorial concert she sang again on its steps­­­­­ ― this time at the March on Washington. That same year, 1963, she was awarded the Presidential Medal of Freedom, the country’s highest civilian honor. She was honored by the Kennedy Center in Washington in 1978 and was a 1986 recipient of the National Medal of Arts. She was awarded a Grammy for “Lifetime Achievement” in 1991, two years before her death at the age of 96. 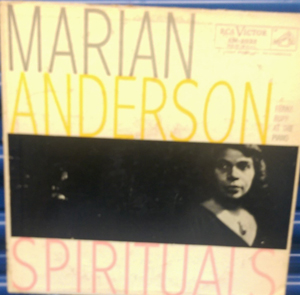 Marian Anderson performed 21 traditional African American songs, some dating back to the slavery era, on this LP recorded by RCA Victor and released in 1956. A contralto renowned for her interpretations across all genres of music, Anderson grew up in Philadelphia as a member of two devoutly religious families and first sang in public as a child in church choirs. 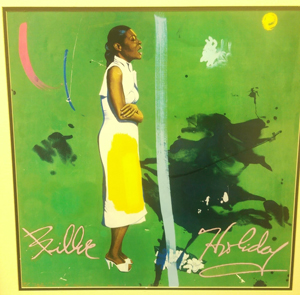 from a painting by artist Carole Hand

Billie Holiday emerged in the Big Band Era of the 1930s as one of the great vocalists of American jazz and popular song. Although she struggled throughout her life with drug addiction and abusive partners, by the time of her premature death in 1959 at the age of 44 she was recognized as a major influence on modern music by virtue of a singing style characterized by jazz phrasings and tempos and remarkable for its originality and depth of feeling. Her recordings still attract legions of fans. She was awarded four Grammys in the years after her death. In 1972, her life was portrayed on the big screen in “Lady Sings the Blues,” starring Diana Ross, ex-lead singer of the popular Motown girl group The Supremes.

The varied achievements of 20 African American women are celebrated in this detailed print. They include entertainers, movie stars, artists, athletes, educators and political, community and business leaders. Students are encouraged to learn about these important role models. 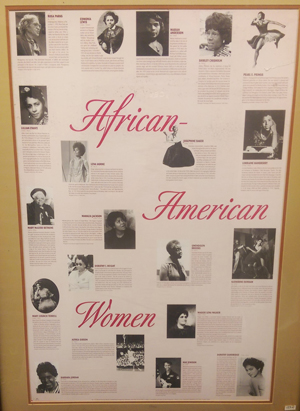