Traveling Presentation 1: “I Have A Dream” 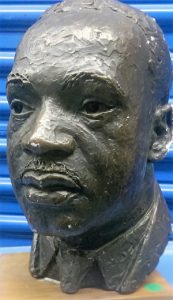 Martin Luther King Jr. was born on January 15, 1929. He attended segregated public schools in Georgia, graduating from high school at the age of 15 and receiving his bachelor’s degree at 19 from Morehouse College in Atlanta. He pursued religious studies at Crozer Theological Seminary in Crozer, Pennsylvania, and won a fellowship to Boston University, where he completed his doctorate in 1953. As a young minister in Montgomery, Alabama, in 1955, he led a successful boycott of the city’s segregated public transportation system that brought him to national attention and helped spark the modern Civil Rights movement. A gifted orator, a tireless organizer and a fearless campaigner, he inspired millions to believe that political and economic equality for African Americans could be won through non-violence, establishing what would be a philosophical cornerstone of the struggle against racism in America. In 1964 he was awarded the Nobel Peace Prize. He was assassinated in Memphis, Tennessee, on April 4, 1968. 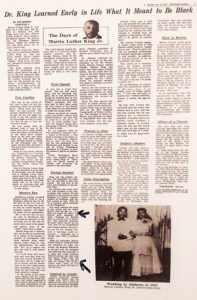 One in a syndicated series excerpted from the 1971 book “The Days of Martin Luther King Jr.” by journalist and best-selling author Jim Bishop. The book recounts details of Dr. King’s early life, his first personal encounters with racism in the South, and the experiences that helped shape his philosophy of non-violence. It includes a photo from the wedding album of Dr. and Mrs. King, who were married in Alabama in 1953.

This montage of photographs from the March on Washington was published in LIFE nine days after the March ended. The central photograph shows Dr. King in minister’s robes addressing the crowd from the Lincoln Memorial. The surrounding images show Dr. King suffering police harassment and arrests and surviving an assassination attempt. The caption reads: “The non-violent man who drew violence to himself.” 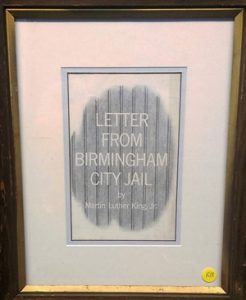 In the spring of 1963, Dr. King, along with members of his Southern Christian Leadership Conference and activists from other Civil Rights groups, were organizing marches, sit-ins and other public demonstrations to protest segregation and other racially discriminatory policies in Alabama’s largest city. They were arrested and jailed in April of that year for defying a court order forbidding their activities. Dr. King was moved to write “Letter from Birmingham City Jail” after a newspaper was smuggled to him in his cell containing a statement by local white clergymen criticizing the demonstrations. … “Begun on the margins of the newspaper in which the statement appeared while I was in jail”— Dr. King later wrote — “the letter was continued on scraps of writing paper supplied by a friendly black trustee and concluded on a pad my attorneys were eventually permitted to leave me.” … The pamphlet presented an eloquent defense of non-violent protest in the struggle against racial injustice and was widely published, becoming a key text of the Civil Rights movement. 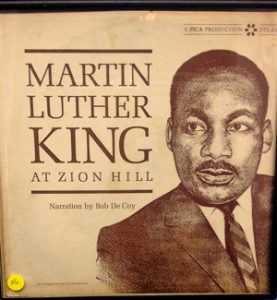 Long before cable TV, the Internet, YouTube and social media, Civil Rights leaders had to innovate to communicate with their followers and bring their ideas to the public during an era when mainstream television and radio were largely closed to them. Records were an important and popular alternative. … This rare vinyl LP, produced by The Public Information Communications Association, features an electrifying speech given by Dr. King at a Civil Rights rally at Zion Hill Baptist Church in Los Angeles in June 1962. The speech, recorded in full, covers six tracks of the album ― three on Side A, three on Side B ― some of the tracks accompanied by Gospel music. 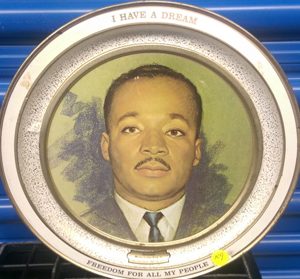 “I Have a Dream — Freedom For All My People”

This commemorative tray was cast after Dr. King’s death and features on the front a lithograph of the Civil Rights leader and on the back excerpts from the last sermon he gave at Ebenezer Baptist Church in Atlanta, Georgia. Dr. King was co-pastor at Ebenezer with his father, the Rev. Martin Luther King Sr. … Titled “His Eulogy,” the text on the tray back concludes with the following words:

If I can do my duty as a Christian ought,
If I can bring salvation to a world once wrought,
If I can spread the message as the Master taught,
Then my living will not have been in vain.” 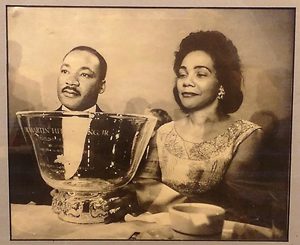 This photograph was taken at the University of Oslo in Norway, where Dr. King, joined by his wife, Coretta Scott King, was awarded the 1964 Nobel Peace Prize. Dr. King accepted the prize, he said, on behalf of “a Civil Rights movement which is moving with a determination and a majesty, through risk and danger, to establish a reign of freedom and a rule of justice”.

The life and work of Dr. Martin Luther King Jr. were commemorated with this 15-cent stamp issued by the U.S. Postal Service in 1979. The stamp was the second in the Postal Service’s “Black Heritage Series”. (Harriet Tubman was the first.) The series has since grown to honor dozens of African Americans whose lives and accomplishments have impacted the nation.