Traveling Presentation 7: A Legacy of Achievement 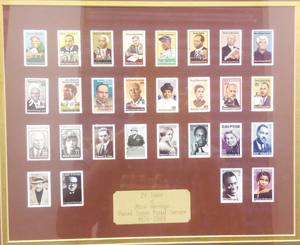 This framed display contains the first 28 years of the “Black Heritage Series,” the longest-running series of commemorative U.S. stamps. The series was conceived in 1975 by Clarence L. Irving, founder of the Black American Heritage Foundation, who wanted to ensure that the accomplishments of African Americans were recognized as part of the celebrations surrounding the U.S. Bicentennial in 1976. The proposal quickly outgrew its original scope, and in 1978, the U.S. Postal Service, as part of its mission “to celebrate the people, events, and cultural milestones that are unique to our great nation,” created a totally new stamp series to honor the role of black Americans in U.S. history. In 1978, the first stamp in the Black Heritage Series was issued in honor of Harriet Tubman, who also was the first African American woman to appear on a U.S. stamp. The following year, Dr. Martin Luther King Jr. became the second in the series. Subsequent honorees have included scientists, statesmen, politicians, activists, educators, authors, artists, entertainers and athletes, among others. The newest honoree, issued on February 2, 2016, is Richard Allen, Philadelphia preacher, activist and civic leader and founder of the African Methodist Episcopal Church. 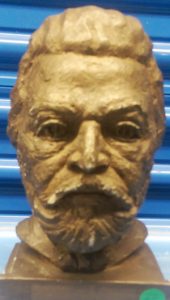 Norbert Rillieux was a pioneer in the creation of sugar as we know it. … Born in New Orleans to a white French engineer and plantation farmer and a former slave, Rillieux’s mixed race did not permit him the full social status of a white person in the South, but he was able to take advantage of educational opportunities not permitted to African Americans, and he attended private schools and was sent to Paris to study engineering. … In the early 19th century, sugar refining was a time-consuming, labor-intensive and dangerous process, involving the handling of boiling-hot liquids. Much of the sugar was burned off in the process, resulting in a system of production that was inefficient and costly. Also, slaves on sugar plantations performed most of the work, so they were most exposed to the dangers. … Rillieux wanted to improve the process, and as chief engineer of a sugar refinery owned by his family he obtained a patent for a machine that used air pressure to reduce boiling points during refining so that lower and more easily controlled temperatures could produce enough steam to heat raw sugar cane to produce sugar. Refining became more efficient as a result, and sugar production increased dramatically, which made it more affordable for people to buy. But its most important contribution was in protecting lives by ending the older, dangerous methods of production. The Louisiana State Museum houses a memorial to honor Rillieux’s contributions. 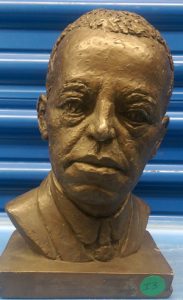 Lewis Latimer’s groundbreaking work on the electric light bulb made the technology practical for lighting homes, streets and public places. … Latimer was born in Massachusetts to parents who escaped from slavery in the South, and as a teenager he fought in the Civil War on the crew of a Union gunboat. He taught himself mechanical drawing and became head draftsman for a patent law firm in Boston, where his skills became so well-known that in 1876 he was sought out by Alexander Graham Bell to design the technical plans that resulted in Bell’s patent for the first telephone. … His most important work involved the incandescent, or electric, light bulb, which was a new invention at the time. Credited to Thomas Edison, the invention basically employed the same technology we use today — a wire filament heated inside a glass tube so that it glows — but Edison’s light bulb had a serious flaw: it burned out after only a few days. Latimer worked for a company owned by a competitor of Edison’s, who wanted to improve on Edison’s invention. He turned to Latimer, who created a method for encasing the filament inside the bulb within a cardboard envelope. This prevented the filament from disintegrating. The bulbs lasted much longer, and electric lighting became efficient and practical. … Latimer would go on to lead planning teams that helped cities nationwide light their streets and roadways. He helped to install the first electric generating plants in Philadelphia and New York City and later worked for Edison as chief draftsman and patent specialist for the Edison Electric Light Company — the forerunner of today’s General Electric Co. — where he authored the world’s first comprehensive book on electric lighting. 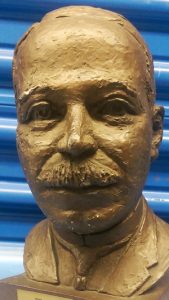 Surgeon and educator Daniel Hale Williams founded America’s first interracial hospital and nursing school and performed the nation’s first successful heart surgery. … He was born in Pennsylvania, and as a young man worked as a shoemaker to support his family. He completed high school and at the age of 20 became an apprentice to a former surgeon-general of the state of Wisconsin. He studied medicine at Chicago Medical College and entered private practice on Chicago’s South Side. He taught anatomy at the college and served as surgeon to the City Railway Company. In 1889, the governor of Illinois appointed him to the state’s Board of Health. … Williams was determined that Chicago should have a hospital open to all races where both black and white doctors could study and where black nurses could receive training. In May 1891, he realized his dream with the opening of Provident Hospital and Training School for Nurses. … It was at Provident in the summer of 1893 that Williams saved the life of a stabbing victim by performing an operation that repaired several knife wounds to the man’s heart. The landmark operation, the first successful heart surgery in the United States, was hailed in the press, and Williams became chief surgeon of Freedman’s Hospital in Washington, D.C., the most prestigious medical position open to African Americans at that time. … Williams helped organize the National Medical Association for black professionals, who in those days were barred from the American Medical Association. In 1913, he became the first African American to be inducted into the American College of Surgeons. 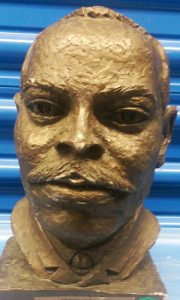 Granville T. Woods, known as the “Black Edison,” was a prolific inventor whose many creations improved telephone and telegraph communications and helped make public transportation safer and more efficient. … Born in Columbus, Ohio, Woods received little formal schooling and worked many jobs in his youth. At the age of 20, he began studying electricity and took courses in electrical engineering. Woods sold the patent for his first major invention — a telephone transmitter that combined features of the telephone and telegraph — to Alexander Graham Bell, the inventor of the telephone. The money allowed Woods to devote himself fully to research, and he set up his own company to develop, manufacture and sell electrical devices. His inventions included the “troller,” a grooved metal wheel that allowed street cars (later known as “trolleys”) to collect electric power from overhead wires, and his work would become the basis for the “third rail” systems still used by electric-powered transit networks today. … Woods’ most important invention was the multiplex telegraph, also known as the “induction telegraph”. It allowed voice communication over telegraph wires and vastly improved the safety of train travel by reducing errors that caused accidents. Woods defeated a lawsuit by Thomas Edison that challenged his patent for the multiplex telegraph, and he turned down Edison’s offer to make him a partner. Instead, he reorganized his company and later moved his research operations to New York City. By the time of his death, he had been granted nearly 60 patents, many of which were assigned to the major manufacturers of electrical equipment that are still a part of everyday life. 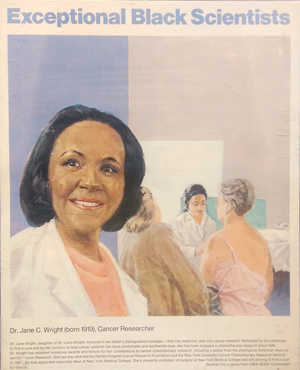