These graphic images tell of the history and horrors of the 200-year Atlantic slave trade and slavery in the Caribbean and the parts of North America that became the United States. 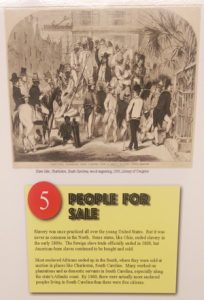 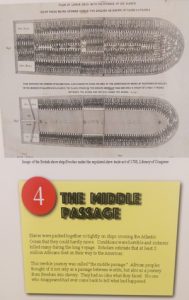 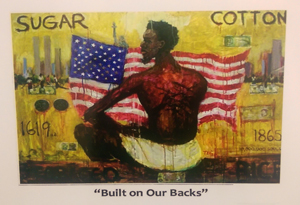 “Built on Our Backs”

Artist Ted Ellis’ powerful evocation of the sufferings of the millions of blacks who toiled over the centuries as slaves. The central figure of Ellis’ montage shows a slave whose bare back is disfigured by scars from whippings. The year “1619” on the left denotes when the first African slaves were brought to Jamestown, the first English colony in North America. On the right the year “1865” denotes the ratification at the end of the Civil War of the 13th Amendment to the Constitution outlawing slavery. … Ellis is renowned as a chronicler of African American life, from rural images of the Deep South to jazz musicians and Civil Rights pioneers to our first black president, Barack Obama. … He has said, “I like to think of myself as a creative historian. I was put here to record history. … My sole purpose has always been to educate through my art.” 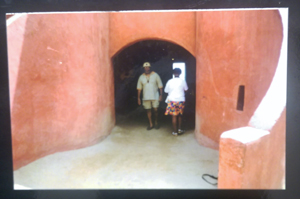 “Door of No Return”

Entrance to the House of Slaves in Senegal, where captured West Africans were imprisoned prior to their transport as slaves to the British, French, Spanish, Dutch and Portuguese colonies of the New World. The museum is located on Gorée Island near the Senegalese capital of Dakar. The building as it now stands was built by the Dutch around 1776. The shipping of slaves from Gorée Island lasted from the early 16th century to the middle of the 19th century, when the French halted the slave trade in their West African colonies. In 1978, UNESCO designated Gorée a World Heritage site. (Original color photograph by Ralph E. Hunter Sr.) 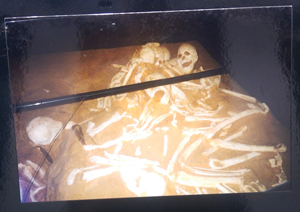 In the House of Slaves museum on Gorée Island — the bones of kidnapped West Africans who died in captivity while waiting to be transported to the Americas as slaves. 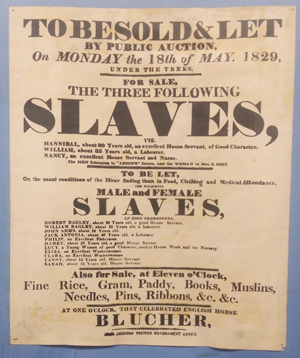 The March 1849 sale of a Kentucky farm included “6 Negro Slaves … Two men 35 years and 50 years old; two boys, 12 and 18 years old; two mulato wenches, 40 and 30 years old. We will sell all together to same party but will not separate them.”… The 1829 sale, conducted at an unknown location, offered three slaves for sale – two men and one woman – and 11 slaves – six men and five women – for hire, with the “renter” responsible for providing them with food, clothing and medical care.

The Legend of Jocko

Antique iron cast of “Jocko” — an African American stereotype popular in the 19th and 20th centuries as a lawn ornament and furnishing in white homes. … The image is based on the story of a boy servant of George Washington’s who froze to death watching over the general’s horses before the Battle of Trenton on Christmas Day 1776. Washington had a statute made of the youth to honor his sacrifice, and it became fashionable to place one of the lantern-bearing statutes in tattered slave clothing at the front of homes to welcome visitors. … The story also goes that Jocko statutes were used by station keepers on the Underground Railroad to mark a house as safe or unsafe for escaping slaves to enter. A green ribbon around Jocko’s hand meant “welcome,” a red ribbon meant “danger”. … Later, “Jocko” became associated with the term “jockey,” which led to the uniformed race horse jockey ornaments still seen on lawns today. … Racial sensitivities awakened in the 1960s by the Civil Rights movement led to the removal of many of the lawn ornaments, and most of those that remain have since been painted white.