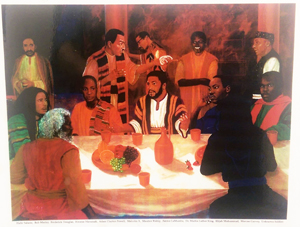 from an oil on canvas 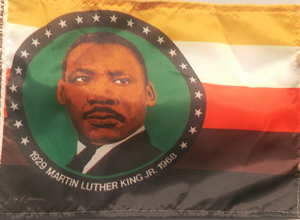 The central feature of this highly symbolic flag is a portrait of Dr. Martin Luther King Jr. within a circular border in black representing the continual struggle of African Americans to achieve justice and equality. … The 22 stars represent the 22 times Dr. King went to jail leading demonstrations for Civil Rights; and they refer also to a famous statement by Dr. King that “Only when it is dark enough can you see the stars.” … The stars also represent the many dedicated Civil Rights workers whose faith in the rightness of their cause was unwavering. … The five horizontal stripes represent the colors of the human race for whose freedom Dr. King gave his life. … The green background behind him calls to mind the words from the Biblical Psalm: “He maketh me to lie down in green pastures. He restoreth my soul.”